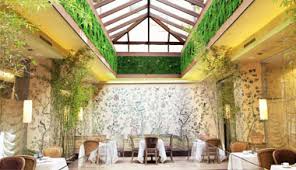 Located in the middle of the city, yet also cunningly away from the main tourist drags, the early 20th-century building appears impressively neo-classical and traditional from the outside, while harbouring modish interiors and artful restorations on the inside.

‘It is about incorporating products that better reflect the setting of the hotel without sacrificing on quality or personality,’ The director says of his design vision, which manifests itself in sleek marble and honey-toned wood. 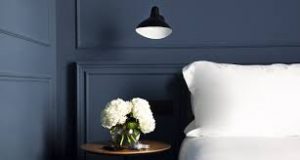 The Tótem is on a leafy street in the Salamanca area, which is the smartest part of Madrid. The best shops are around the corner on Serrano, Goya and cross streets, and there are lots of bars and restaurants nearby.

Tótem exudes discreet urban chic, following the example of the Urso, its sister hotel in Madrid. The elegant building occupies one of the most upmarket corners in the city, with a decadent bar and laid-back restaurant, and looks set to become a favourite of well-heeled locals as well as Madrid regulars. 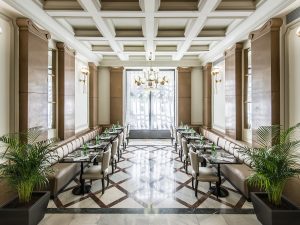 Vincci The Mint is on the Gran Vía, the main avenue through the centre of the city. It is 10 minutes’ walk from the Thyssen-Bormemisza and Prado museums and the Retiro Park. The trendy Chueca neighbourhood is just behind the hotel – you can just slip out of the back door – with boutiques, bars and cafés.

Fashionable and fun, the four-star Vincci The Mint is the sort of hotel that forms part of your city break, rather than just being somewhere to sleep. With zingy design, healthy food, naughty cocktails and a spectacular roof terrace, it is totally on trend and fits right into the peppy Madrid vibe. 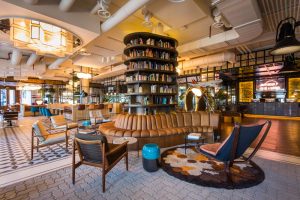 The hotel is between the Retiro Park and Atocha train station – where the airport bus stops, as well as the train service from Terminal 4. You can walk to the Prado, Reina Sofia and Thyssen-Bornemisza museums in 10-15 minutes, as well as lesser-known but fascinating places such as the Royal Tapestry Factory

Dazzling design and a clubby vibe combine to make the Only YOU Atocha the new fashionable place to stay in Madrid. Smart rooms, great food and a sense of space create a contemporary luxe environment where guests might just forget to leave the hotel all weekend. 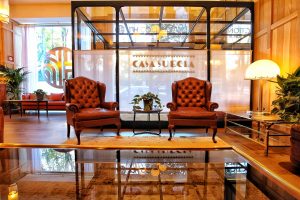 The hotel is right in the centre of Madrid, on a side street off the Gran Vía, next to the Círculo de Bellas Artes cultural centre, where there is a café and roof terrace as well as exhibition spaces and a cinema. The Teatro de La Zarzuela, where the Madrid form of operetta is performed, is around the corner.

One of Madrid’s classic hotels has been remodelled to create the five-star NH Collection Suecia, which quietly exudes glamour from its handy-for-everything location. Elegant yet understated design, excellent service and superb cuisine combine to create a warm and relaxing atmospher

Contact us for your private luxury guided tour in Madrid

Find more like this in: MC&C Free Tips, Transport & Accomodation