Cuisine & Protocol at the Hapsburg´s Court

Holy Roman Emperor  Charles V ( 1st of  Spain) , ruled a great empire where “the sun never set”. In the 16th century his ships brought huge amounts of gold and silver from the new world to the port of Seville, thus making Spain the first European power. Cristóbal Colón and further Conquerors had brought as well a lot of culinary products unknown in the old world such as tomatoes, potatoes, corn, pumpkins, pine-apples, chilli peppers, lima and cocoa, the latter not appreciated at the beginning. But this is another story…! 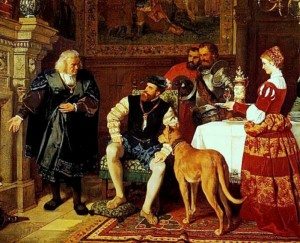 These imported culinary products allowed the Spanish Court’s cuisine become much exotic and diverse if compared with the austere and poor one there used to be in other European palaces.

All the Hapsburgs, from the powerful Charles 1st and the dreadful Phillip 2nd to the weak Charles 2nd with whom the Hapsburg dynasty concluded in the XVIIth century, were really foodies. They gave food and drink a prominent role in their palatial life, though the normal population was starving.

In those times of opulence it was established a special staff in charge of providing physical wellness to the Royal Family: they were denominated the “Oficio en Boca” or “Mouth Service” Staff.

The Main Cook used to coordinate the different specialized subordinates: The “Guard Mangier”, in charge of the food room, the Food Buyer, in charge of providing food from the market, the “Sumiller” or Wines Responsible, dealing with the different wines, Special cooks for sauces, for desserts, for cakes and for stews, the Spices Expert,  The Fruits Expert.

Opposite to what we might think, daily meals were a tiresome ritual for the King and his court:

Once the King was sitting at the table, a Priest would bless the table and the food. Then the Pantler, in charge of the bread, and the Carver or Chief Waiter (the one cutting in pieces the food) along with 6 servants would bring the different dishes. The Chief Waiter would then taste all the food served in order to make sure that it was not poisoned.

nd two senior servants would kneel and offer the wine to the King while the former would put a golden or silver tray under the King’s chin so that not a drop could fall on his majesty’s clothes. The Cup-Bearer would finally provide him with a napkin to dry his lips and then the whole group would leave off with the cup.

A typical banquet used to include several delicacies such as young pigeons served in black sauce with chocolate, quails, turkeys, pig loins, veal liver or hare pâté. Also rabbits with capers and stuffed goat were very much appreciated, as well as meat coming from their favourite sport: hunting. Regarding fish, they enjoyed trouts and salmons. All these dishes were served in big tables at the choice of the guests. That’s what we would call now a buffet.

For a mid-afternoon snack they would have some 30 types of dishes: trout cakes, chicken, veal rolled with pasta, gourmet sausages and dried cow meat among others. Hot chocolate had wide acceptance too.

In Christmas time no less than 12 starters, 12 fish courses and 12 meat courses were served without forgetting the typical Spanish “Cocido” (chickpea stew with vegetables and several types of meat).

It was established that the spare food was to be distributed among the close servants with priority of the main ones and finishing with the last ones in importance.

We can assure that austerity was not present at the Hapsburg’s court.