The 5 oldest establishments in Madrid:

Pharmacy of the Queen´s Mother 1578 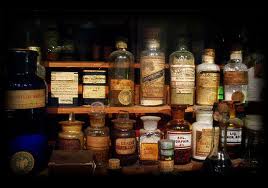 It is known as the Queen´s Mother as this pharmacy was in charge of the Queen, María Cristina, medicine in the Century XIX. However, the establishment has been at 59 Plaza Mayor since the end of the XVI Century. Reconstructed in 1913 by architect Carrasco-Muñoz Encina, it is one of the best examples of Modernism in Madrid. It is unique for its library and formulas of prodigious remedies, such as their red ointment that works against alopecia or their pieces of old fossil that fight tuberculosis.

Legend tell us that in his basement there is one of the secret passages that offered out of town for fugitives , we’ll tell you more secrets in  Essential Madrid Tour

This is the oldest hotel in Madrid, and surely in all of Spain. It originated in order to provide a place to stay for guests and foreigners who would come in call of the court. There it was, on Postas street, where you can still find it today. It has seen scarcity and abandonment. Today it is gleaming with a shine that has turned this hotel into an authentically charming one, a small palace, restored by a High Tech Chain and re-opened at the end of the summer in 2005.

Between the Plaza Mayor, the Cavas and Toledo Street, you can make a numerous reservation and enjoy a fabulous lunch here. The Villa Inn, dating back to 1642, was found in a place where carriages would pass through with people running their errands. From there, came its success. Situated in what once used to be a flour mill, the center of Street Cava Baja, this restaurant was able to resist the decline and disappearance of other restaurants, similar in style, surrounding establishments. The restaurateur, Felix Colomo, made a roasting over where they serve a stupendous stews and meats in clay pots.

It is located on 13 Leon Street, in the heart of the neighborhood of Las Letras (The lyrics). This pharmacy is a place of residence, a chemist that dates back to the Golden Age. The establishment has conserved its old fashioned commercial aspect. From even the cash register to the tools and cups, much of this was donated to the Museum of the Hispanic Pharmacy. From the outside of the building you can enjoy the elegant blue and white ceramic that beautifully decorate it.    You can discover more secrets on our tour of the Literary Quarter 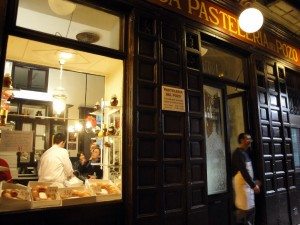 The oldest of the all the bakeries, known for their artisan filo pastries that are filled with a cream called ¨cabello de Angel¨. This along with their famous crunchy donut-like pasterie, turron, and Bread of Cadiz, has crossed borders! It all started with the Agudo family, one of the most well-known Madrilenian family at the time. At 8 Pozo Street, where its name orginated, there was a miraculous well in which people would throw in relics of Saints.

The mystery and divine smell would fill the streets, it still enchants Madrilenians!

Follow us in the Centenary Pastry Shop Tour …yummy !